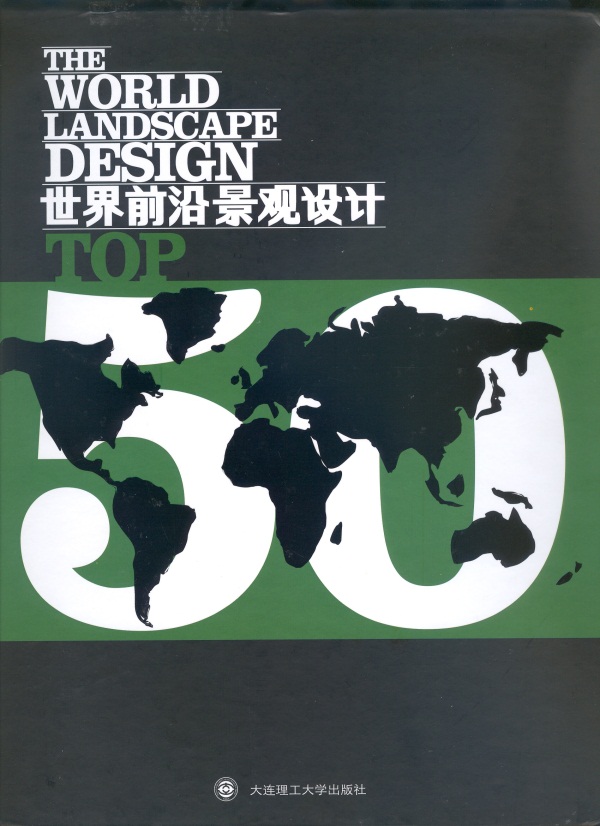 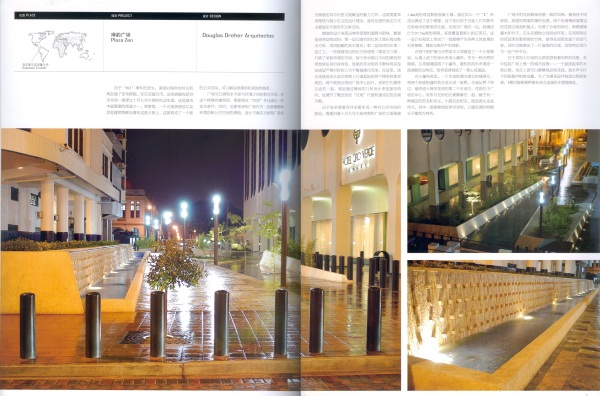 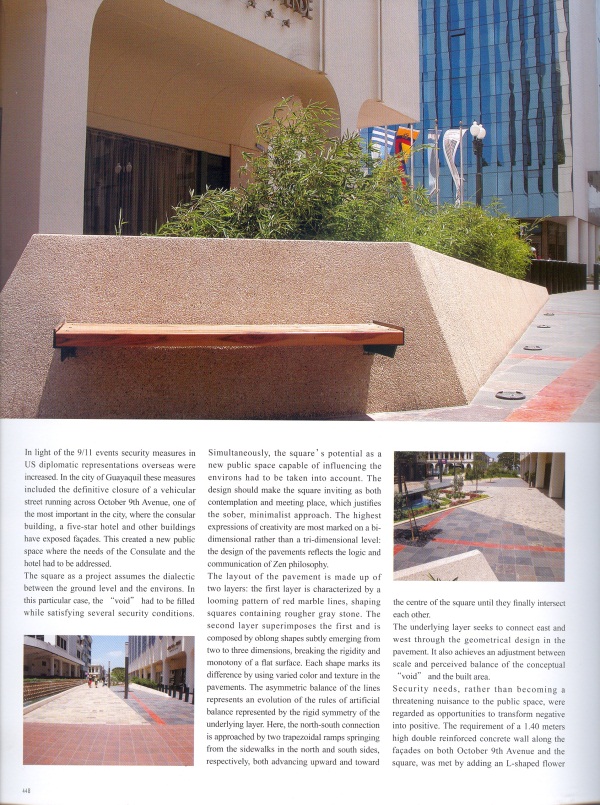 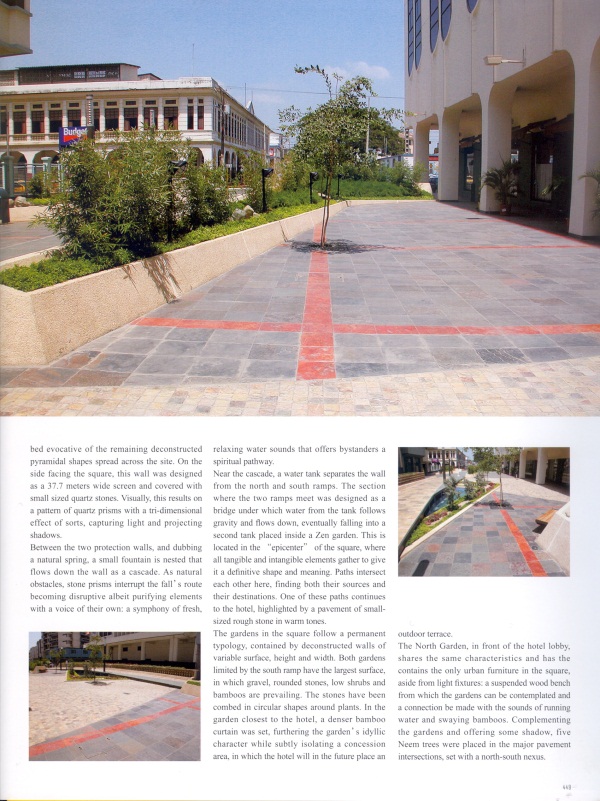 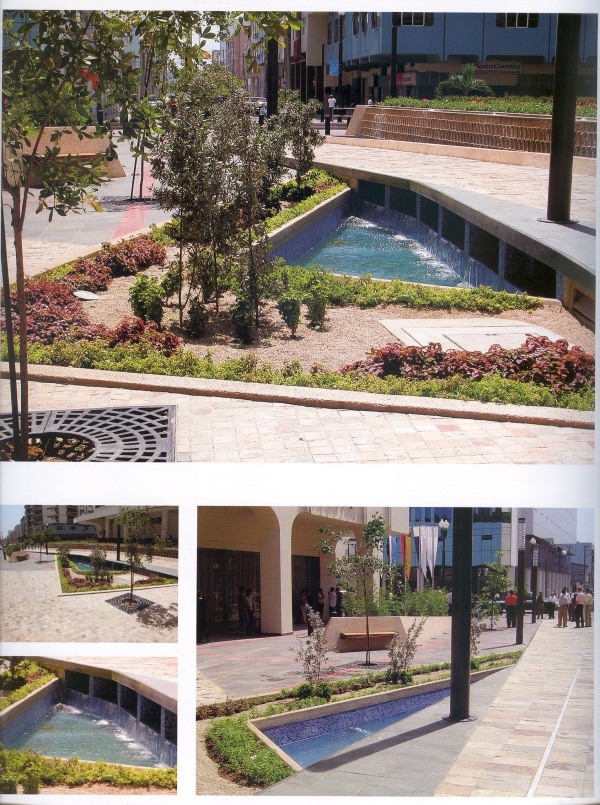 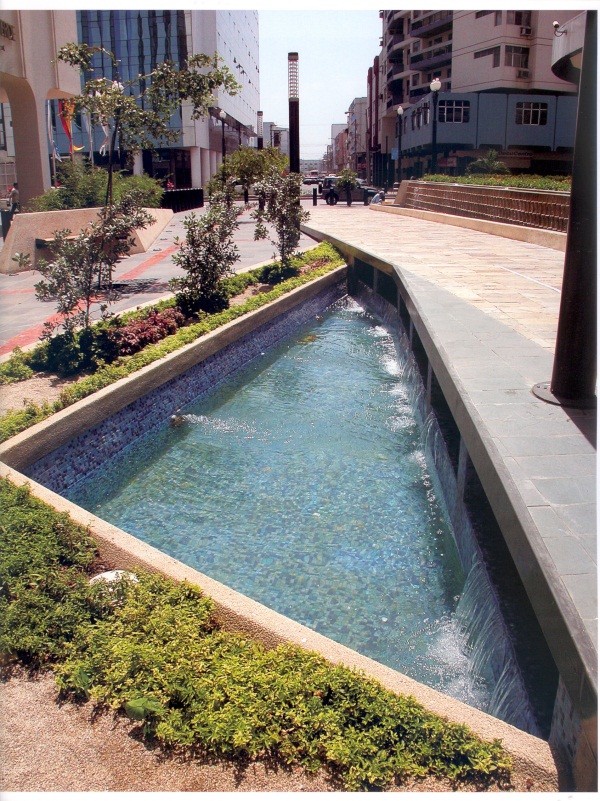 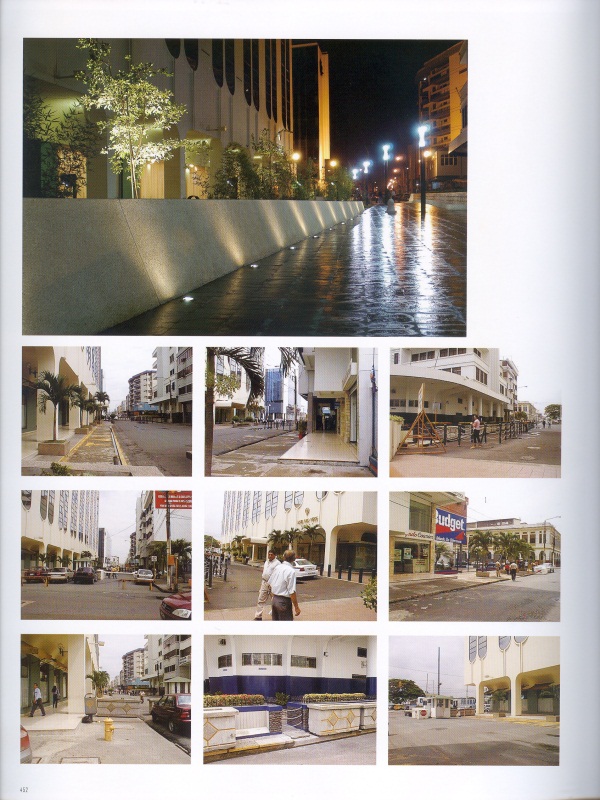 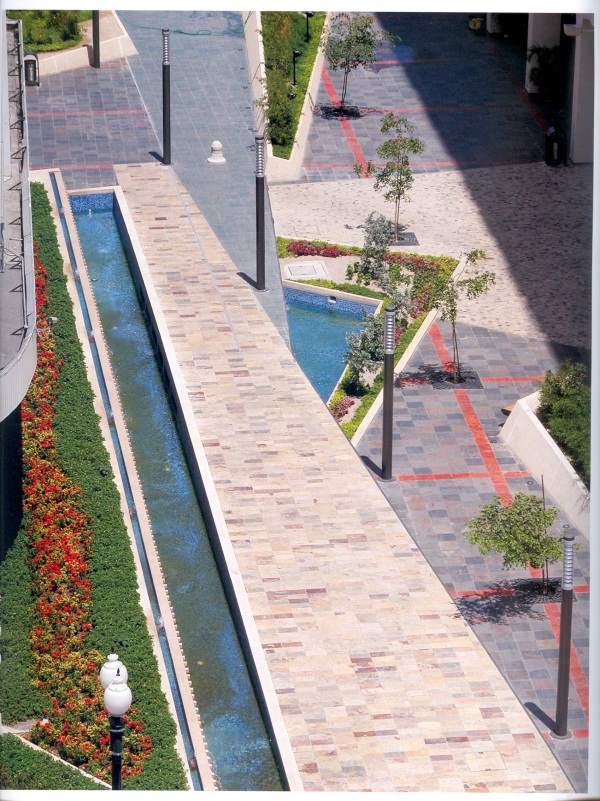 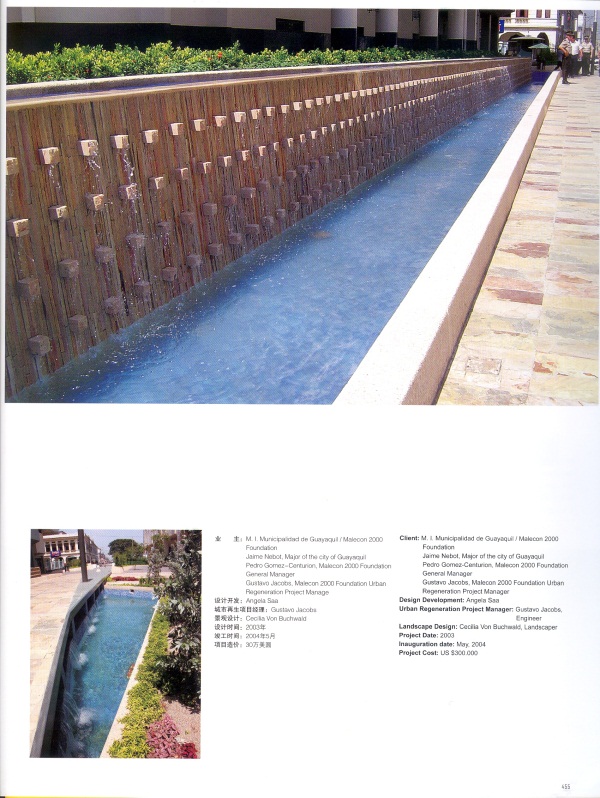 In light of the 9/1 l events security measures in US diplomatic representations overseas were increased. In the city of Guayaquil these measures included the definitive closure of a vehicular street running across October 9th Avenue, one of the most important in the city, where the consular building, a five-star hotel and other buildings have exposed facades. This created a new public space where the needs of the Consulate and the hotel had to be addressed.

The square as a project assumes the dialectic between the ground level and the environs. In this particular case, the "void" had to be filled while satisfying several security conditions.

Simultaneously, the square´s potential as a new public space capable of influencing the environs had to be taken into account. The design should make the square inviting as both contemplation and meeting place, which justifies the sober, minimalist approach. The highest expressions of creativity are most marked on a bidimensional rather than a tri-dimensional level: the design of the pavements reflects the logic and communication of Zen philosophy.

The layout of the pavement is made up of two layers: the first layer is characterized by a looming pattern of red marble lines, shaping squares containing rougher gray stone. The second layer superimposes the first and is composed by oblong shapes subtly emerging from two to three dimensions, breaking the rigidity and monotony of a flat surface. Each shape marks its difference by using varied color and texture in the pavements. The asymmetric balance of the lines represents an evolution of the rules of artificial balance represented by the rigid symmetry of the underlying layer. Here, the north-south connection is approached by two trapezoidal ramps springing from the sidewalks in the north and south sides, respectively, both advancing upward and toward the centre of the square until they finally intersect each other.

The underlying layer seeks to connect east and west through the geometrical design in the pavement. It also achieves an adjustment between scale and perceived balance of the conceptual "void" and the built area.

Security needs, rather than becoming a threatening nuisance to the public space, were regarded as opportunities to transform negative into positive. The requirement of a 1.40 meters high double reinforced concrete wall along the facades on both October 9th Avenue and the square, was met by adding an L-shaped flower bed evocative of the remaining deconstructed pyramidal shapes spread across the site. On the side facing the square, this wall was designed as a 37.7 meters wide screen and covered with small sized quartz stones. Visually, this results on a pattern of quartz prisms with a tri-dimensional effect of sorts, capturing light and projecting shadows.

Between the two protection walls, and dubbing a natural spring, a small fountain is nested that flows down the wall as a cascade. As natural obstacles, stone prisms interrupt the fall´ s route becoming disruptive albeit purifying elements with a voice of their own: a symphony of fresh, relaxing water sounds that offers bystanders a spiritual pathway.

Near the cascade, a water tank separates the wall from the north and south ramps. The section where the two ramps meet was designed as a bridge under which water from the tank follows gravity and flows down, eventually falling into a second tank placed inside a Zen garden. This is located in the "epicenter" of the square, where all tangible and intangible elements gather to give it a definitive shape and meaning. Paths intersect each other here, finding both their sources and their destinations. One of these paths continues to the hotel, highlighted by a pavement of small-sized rough stone in warm tones.

The gardens in the square follow a permanent typology, contained by deconstructed walls of variable surface, height and width. Both gardens limited by the south ramp have the largest surface, in which gravel, rounded stones, low shrubs and bamboos are prevailing. The stones have been combed in circular shapes around plants. In the garden closest to the hotel, a denser bamboo curtain was set, furthering the garden´ s idyllic character while subtly isolating a concession area, in which the hotel will in the future place an outdoor terrace.

The North Garden, in front of the hotel lobby, shares the same characteristics and has the contains the only urban furniture in the square, aside from light fixtures: a suspended wood bench from which the gardens can be contemplated and a connection be made with the sounds of running water and swaying bamboos. Complementing the gardens and offering some shadow, five Neem trees were placed in the major pavement intersections, set with a north-south nexus.