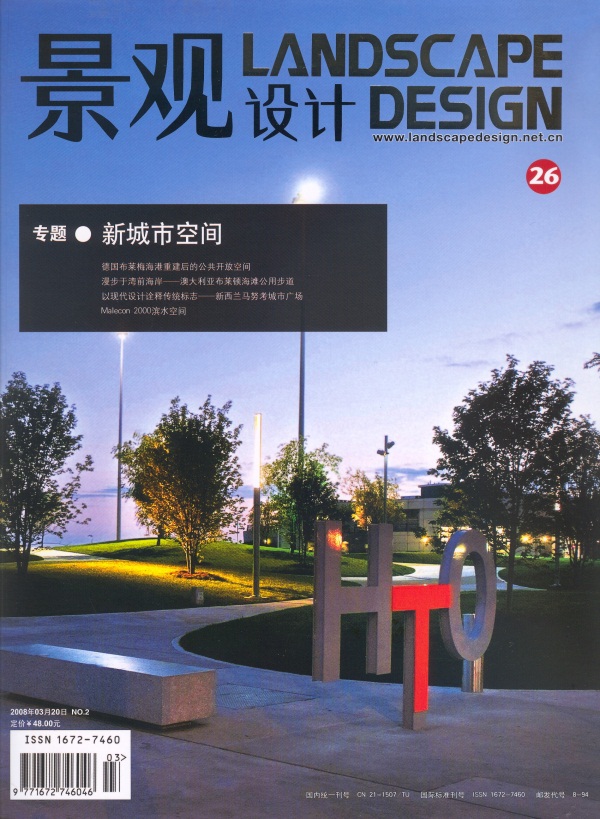 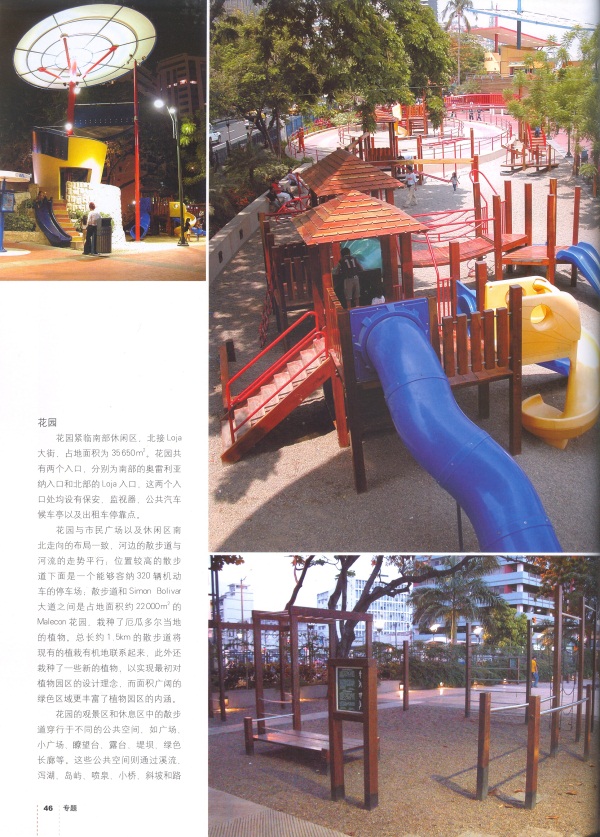 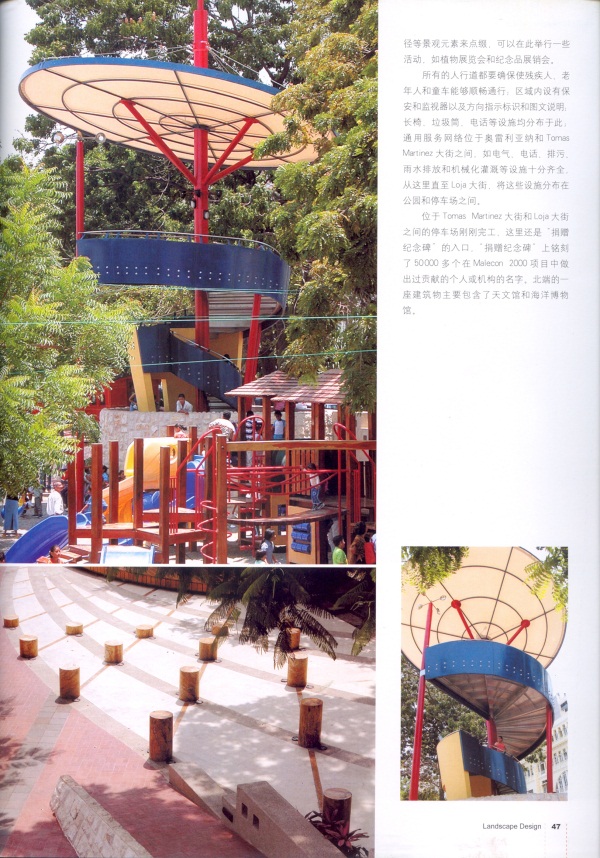 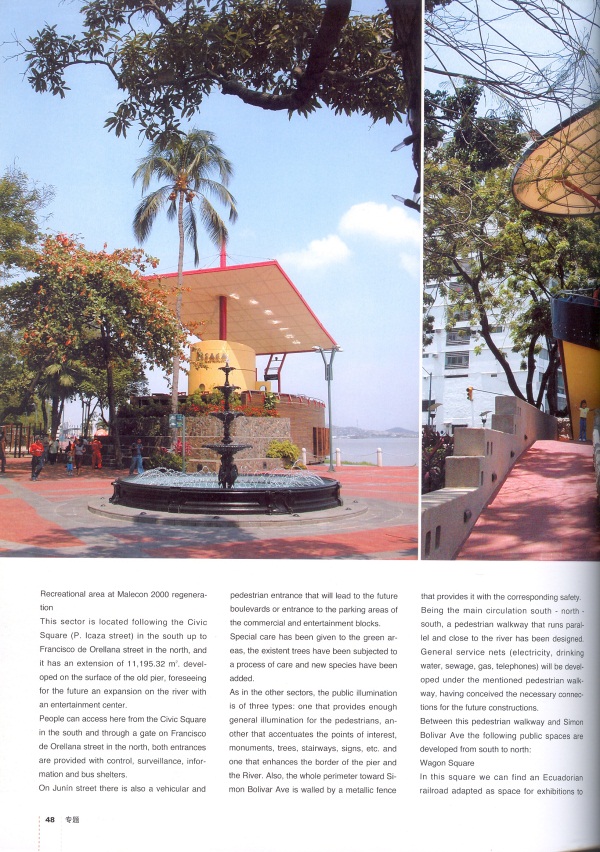 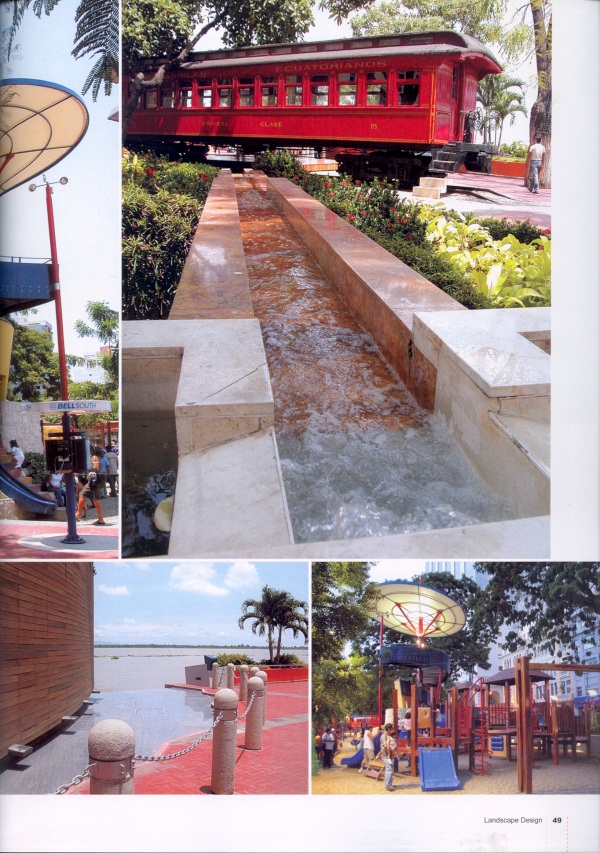 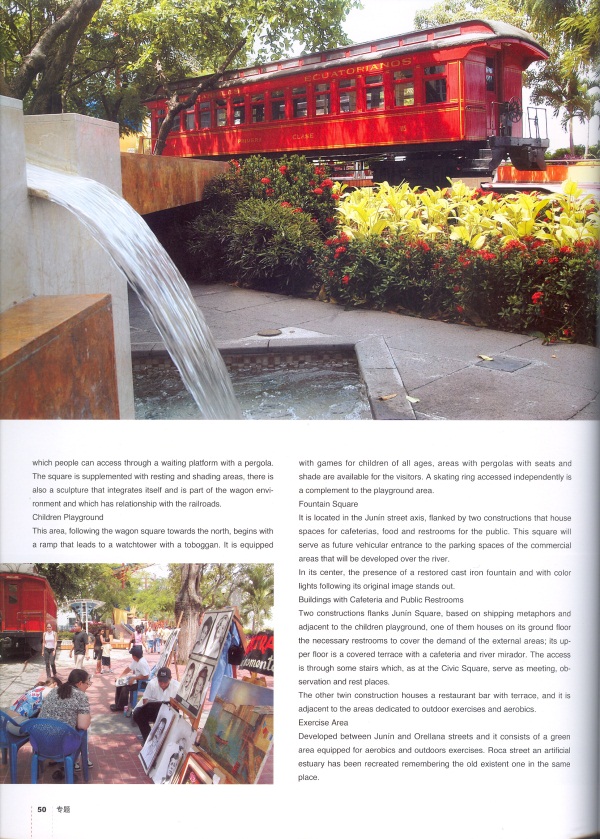 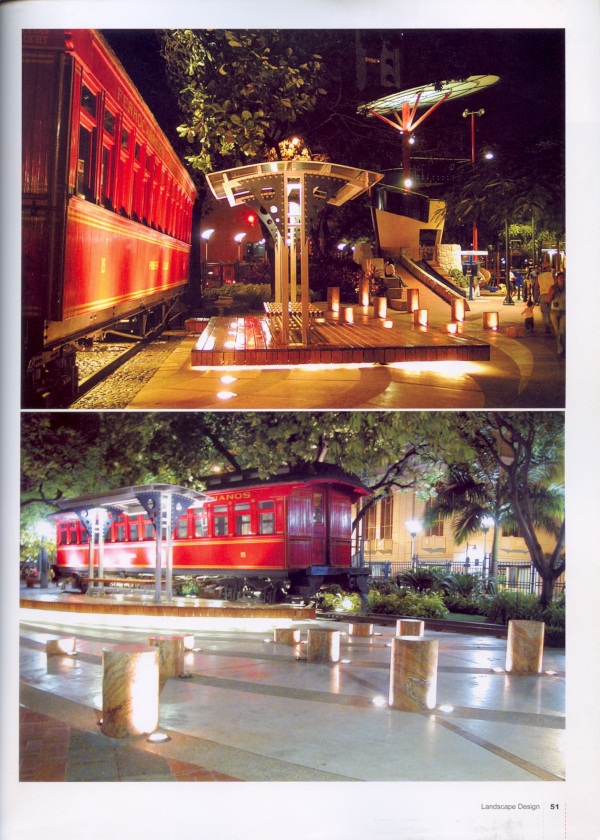 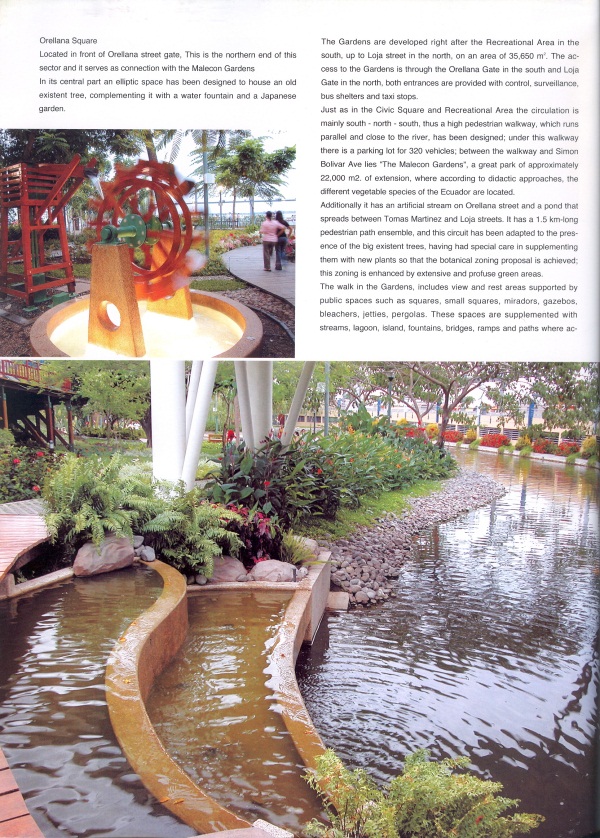 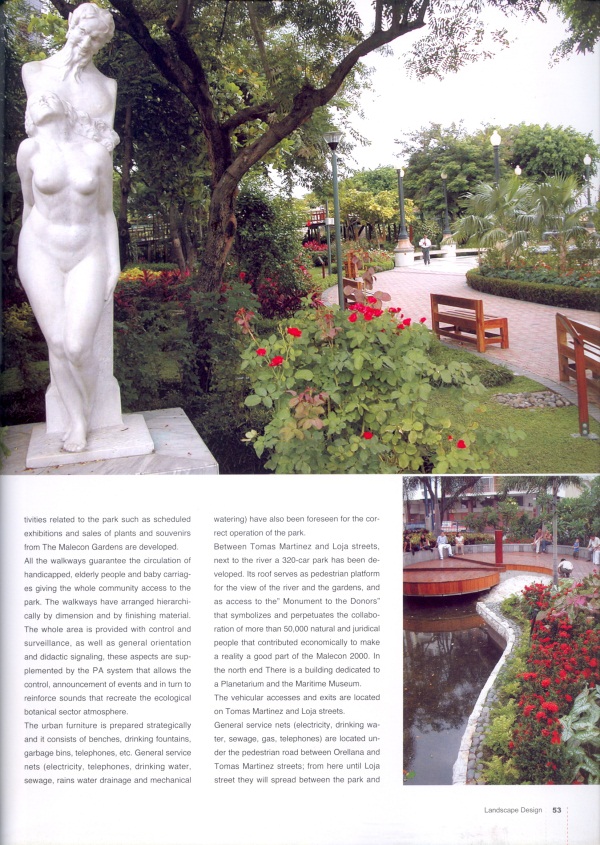 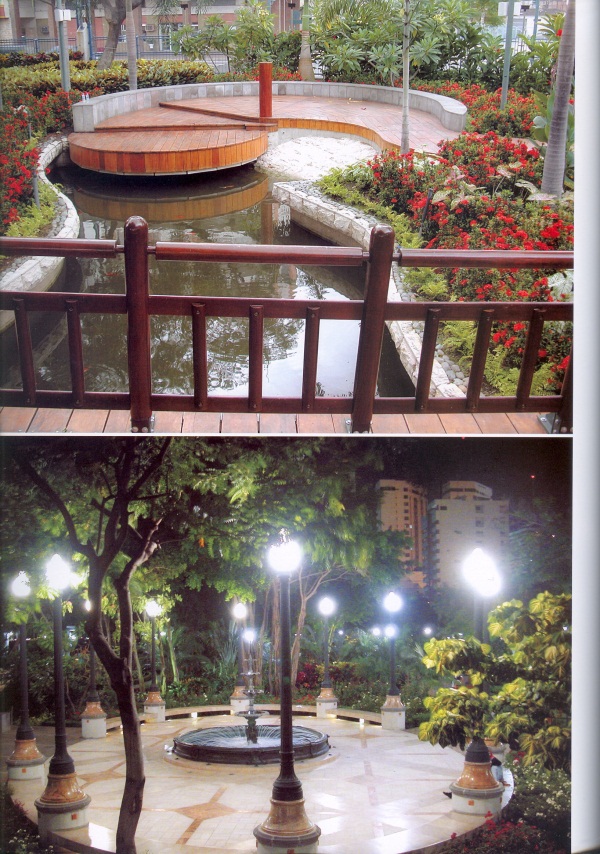 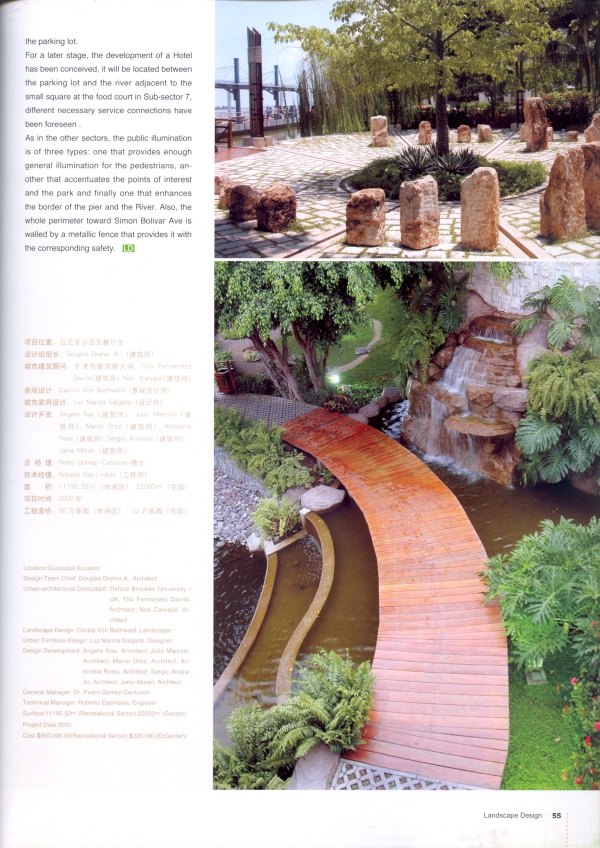 This sector is located following the Civic Square (P. Icaza Street) in the south up to Francisco de Orellana Street in the north, and it has an extension of 11,195.32 m2. developed on the surface of the old pier, foreseeing for the future an expansion on the river with an entertainment center.

People can access here from the Civic Square in the south and through a gate on Francisco de Orellana Street in the north, both entrances are provided with control, surveillance, information and bus shelters.

On JunŪn Street there is al so a vehicular and pedestrian entrance that will lead to the future boulevards or entrance to the parking areas of the commercial and entertainment blocks.

Special care has been given to the green areas, the existent trees have been subjected to a process of care and new species have been added.

As in the other sectors, the public illumination is of three types: one that provides enough general illumination for the pedestrians, another that accentuates the points of interest, monuments, trees, stairways, signs, etc. and one that enhances the border of the pier and the River. Also, the whole perimeter toward Simon Bolivar Ave is walled by a metallic fence that provides it with the corresponding safety.

Being the main circulation south - north south, a pedestrian walkway that runs parallel and close to the river has been designed. General Service nets (electricity, drinking water, sewage, gas, telephones) will be developed under the mentioned pedestrian walkway, having conceived the necessary connections for the future constructions.

Between this pedestrian walkway and Simon Bolivar Ave the following public spaces are developed from south to north:

Wagon Square
In this square we can find an Ecuadorian railroad adapted as space for exhibitions to which people can access through a waiting platform with a pergola. The square is supplemented with resting and shading areas, there is also a sculpture that integrates itself and is part of the wagon environment and which has relationship with the railroads.

Children Playground
This area, following the wagon square towards the north, begins with a ramp that leads to a watchtower with a toboggan. It is equipped with games for children of all ages, areas with pergolas with seats and shade are available for the visitors. A skating ring accessed independently is a complement to the playground area.

Fountain Square
It is located in the JunŪn street axis, flanked by two constructions that house spaces for cafeterias, food and restrooms for the public. This square will serve as future vehicular entrance to the parking spaces of the commercial areas that will be developed over the river.
In its center, the presence of a restored cast iron fountain and with color lights following its original image stands out.

Buildings with Cafeteria and Public Restrooms
Two constructions flanks JunŪn Square, based on shipping metaphors and adjacent to the children playground, one of them houses on its ground floor the necessary restrooms to cover the demand of the external areas; its upper floor is a covered terrace with a cafeteria and river mirador. The access is through some stairs which, as at the Civic Square, serve as meeting, observation and rest places. The other twin construction houses a restaurant bar with terrace, and it is adjacent to the areas dedicated to outdoor exercises and aerobics.

Exercise Area
Developed between JunŪn and Orellana streets and it consists of a green area equipped for aerobics and outdoors exercises. Roca Street an artificial estuary has been recreated remembering the old existent one in the same place.

Orellana Square
Located in front of Orellana street gate, this is the northern end of this sector and it serves as connection with the Malecůn Gardens.
In its central part an elliptic space has been designed to house an old existent tree, complementing it with a water fountain and a Japanese garden. The Gardens are developed right after the Recreational Area in the south, up to Loja street in the north, on an area 01 35,650 mī. The access to the Gardens is through the Orellana Gate in the south and Loja Gate in the north, both entrances are provided with control, surveillance, bus shelters and taxi stops.

Just as in the Civic Square and Recreational Area the circulation is mainly south - north - south, thus a high pedestrian walkway, which runs parallel and close to the river, has been designed; under this walkway there is a parking lot for 320 vehicles; between the walkway and Simon Bolivar Ave. lies "The Malecůn Gardens", a great park of approximately 22,000 m2. of extension, where according to didactic approaches, the different vegetable species of the Ecuador are located.

Additionally it has an artificial stream on Orellana Street and a pond that spreads between Tomas Martinez and Loja streets. It has a 1.5 km-long pedestrian path ensemble, and this circuit has been adapted to the presence of the big existent trees, having had special care in supplementing them with new plants so that the botanical zoning proposal is achieved; this zoning is enhanced by extensive and profuse green areas.

The walk in the Gardens includes view and rest areas supported by public spaces such as squares, small squares, miradors, gazebos, bleachers, jetties, pergolas. These spaces are supplemented with streams, lagoon, island, fountains, bridges, ramps and paths where activities related to the park such as scheduled exhibitions and sales of plants and souvenirs from The Malecůn Gardens are developed.

AII the walkways guarantee the circulation of handicapped, elderly people and baby carriages giving the whole community access to the park. The walkways have arranged hierarchically by dimension and by finishing material. The whole area is provided with control and surveillance, as well as general orientation and didactic signalling, these aspects are supplemented by the PA system that allows the control, announcement of events and in turn to reinforce sounds that recreate the ecological botanical sector atmosphere.

Between Tomas Martinez and Loja streets, next to the river a 320-car park has been developed. Its roof serves as pedestrian platform for the view of the river and the gardens, and as access to the "Monument to the Donors" that symbolizes and perpetuates the collaboration of more than 50,000 natural and juridical people that contributed economically to make a reality a good part of the Malecůn 2000. In the north end there is a building dedicated to a Imax and the Maritime Museum.

For a later stage, the development of a Hotel has been conceived, it will be located between the parking lot and the river adjacent to the small square at the food court in Sub-sector 7, different necessary service connections have been foreseen.

As in the other sectors, the public illumination is of three types: one that provides enough general illumination for the pedestrians, another that accentuates the points of interest and the park and finally one that enhances the border of the pier and the River. Also, the whole perimeter toward Simon Bolivar Ave is walled by a metallic fence that provides it with the corresponding safety.†